I take the title of this post from a chapter of Jean-Paul Sartre’s Existentialism and Human Emotions. While Sartre is often drug over the steaming hot coals, I do find some meaning in his writings. Sartre purports that man is “condemned to be free” thereby endorsing ultimate human freedom. It must be noted that the belief behind Sartre’s claim is that there is no creator for the individual. Whereas many endorse the claim that essence precedes existence, Sartre provocatively pushes forward the reversal, that is, existence precedes essence. Thus, with no creator (for Christian, read: God), there is no essential essence to life. One is free from such boundaries and thus can exist freely. We are condemned to be free.

For those who frequent my blog, it should be of no surprise that I disagree with Sartre’s position on the lack of a creator. But my concern here is not with that metaphysical claim. Rather, I do think we all, as human individuals, have something to learn from Sartre. Sartre writes that because an individual is free (Sartre uses the masculine pronoun throughout. I accommodate to gender neutrality), one’s being free “carries the weight of the whole world on [one’s] shoulders; [one] is responsible for…[oneself] as a way of being.”

The freedom of choice is perhaps one of the finest gifts from God humanity could receive. But if we were all honest, we’d likewise view this gift as a curse. Kierkegaard said anxiety 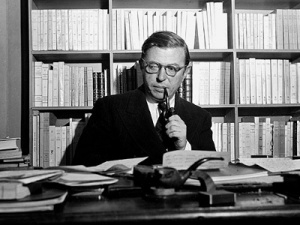 results as the dizziness of freedom – we become so perplexed and sometimes captivated by the many possible choices we make. Sartre here, though his premise is flawed, purports something of the same. Our choice is our own. And it carries significant consequences. I take encouragement from Sartre when he writes that when one enters a situation where he or she can further selfhood, that the person “must assume the situation with the proud consciousness of being the author of it.”

We live in a world of masquerade and scapegoats. Many live in a constant state of denial, thereby deflecting responsibility for one’s choices and actions to something external. When I worked with criminal offenders in Colorado, most clients encompassed this form of cognitive distortion. As I worked there and noticed this prevalent and vivid thought-process, I began to perceive it in society as a whole. People have an extreme difficulty taking responsibility for their actions (and I’m sure Michel Foucault would run away with this thought). Unlike Sartre, people run from their problems or seek “help” in fleeting manners.

We live in the society of instant communication that Kierkegaard so feared. He predicted that society would one day have instant information, but as information is constantly given, no one had anything substantial to say. I think we’ve reach such a point as a culture. In essence, we have exchanged quality for instant quantity. Instead of taking responsibility for one’s choices and actions, one seeks to vomit one’s complaints onto another (or online) for immediate consoling. There is no confrontation with one’s issues, no recognition that one is responsible for the situation he or she is in.

May we wake up. Like or hate Sartre, I think he is onto something here. We must enter our choices with confidence, and with a high degree of prayer and discernment. If a choice you make brings forth uncomfortable circumstances, enter into it. Take hold of it. Seek out a way to modify the paradigm in a way that offers new hope.